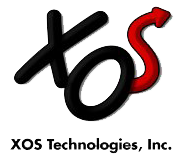 College football keeps getting more and more competitive, and each school is looking for something that will give it an advantage. While star athletes, weight training and practice make a big difference, Virginia Tech has something that puts it over the top — XOS Technology.

XOS Technology is regarded as the best system in the country. NFL teams use it. Many college teams wish they had it. Tech does.

The Tech video department has one of the top video systems in the country, and has expanded its operations to include all the equipment the team needs to be on the cutting edge of video study. Most recently Director Josh Bost made virtual reality a reality! Up to 4 VR cameras can be used to film practice and take players inside of practice at any time of day with the help of Oculus goggles and headphones.

This state-of-the-art video equipment has prepared the Hokies for any possible scenario they may come across in a game. When on the road, coaches and players can use laptop computers to watch video away from the Merryman Center.

What makes this system so potent in terms of preparing a team for a game is its convenience. 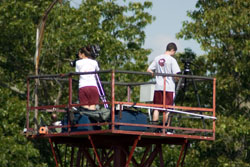 Here’s how the system works. Tape is gathered with video of opponents’ games, Tech games and practices. Each play is labeled in terms of down, distance, formation, protection, play result and many other factors.

This information, matched alongside the video, is entered into the computer. Once this is done, the coaches and players can access any situation with a click of the mouse. With computers in all the coaches’ meeting rooms, they can instantaneously have video footage of any scenario that they can dream up of Tech opponents or the Hokies themselves.

The system gives the coaches an option block that they use to punch in these scenarios. After the coach chooses the situation, the video is queued up in a matter of seconds. 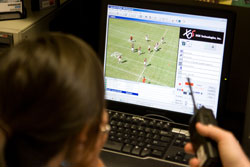 “It’s been a great tool,” says Tech defensive coordinator Justin Hamilton. “Besides the quality and convenience, it’s right there at your fingertips. Players at this level have to realize that there is a lot more involved than just playing the game. The average person doesn’t know all the preparation that’s involved.”

The update in technology not only means an improved program, but also improved video-viewing options. Each of the individual position meeting rooms has a pull-down projection screen and a video projector connected to a computer to display scouting material, allowing players or coaches to access the footage any time they want. Videographers also tape every single practice, which can be viewed by the coaches at the click of a button. This helps the team prepare for games, and gives the coaches access to plays they need.

The equipment has been used the past couple years to help give Tech that extra edge, in both regular-season and bowl games. An example of the program’s presence came in the Hokies’ bowl game against Kentucky in last year’s Belk Bowl. In the days leading up to the game, coaches were given laptops by the video department that contained hours of Wildcat video that the coaches and players could view at their convenience.

Each position had its own meeting room in the Orlando hotel with a laptop set up so the players could watch video
of practice or UK 24 hours a day. Being able to transport game video with relative ease gives the Hokies an advantage, even on the road. Several years ago, Coaches Video Director Tom Booth upgraded the team to XOS ThunderCloud. That program/app allows all coaches and players to watch video of games, opponents, and practice on their IPADs when outside the football complex.The team also got its complete network switched out over the summer with 50 new computers

“The greatest teaching tool is the ability to show someone what they’re doing, right or wrong,” head coach Justin Fuente said. “With our video equipment, we can do that quickly. The ease with which we can do these things and the way we can put certain plays and scenarios together makes us more efficient in getting ready to play a game on Saturday.”