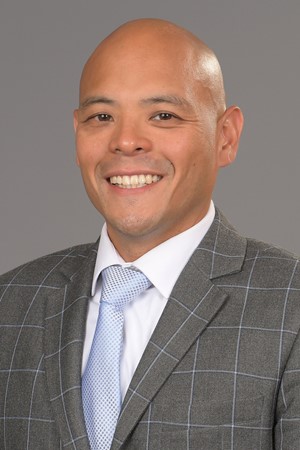 Jed Castro began his 2nd stint in the Virginia Tech Athletics Video department in 2005. A former Video Coordinator, Jed is now Senior Director for HokieVision. On a daily basis he is managing the entire HokieVision department and guiding its videoboard & website content. For 11 years before that Jed was producing content for the dept. and managing a vast array of student workers. In a former life Jed worked as a reporter/anchor for WSLS-TV in Roanoke, VA; executive producer of Virginia Tech Sports Today; director of video for Kairos - Los Angeles, and digital effects artist for the film Outsource.

A 1997 graduate of Virginia Tech with a degree in Communication Studies, Jed is currently earning a master's degree from Virginia Tech. He resides in the New River Valley, enjoys traveling, and watching sports and movies. He and his wife have visited all 50 states in the Union, and have their goals set on every continent, so if you would like to help them make it to Antarctica, please contact him directly. 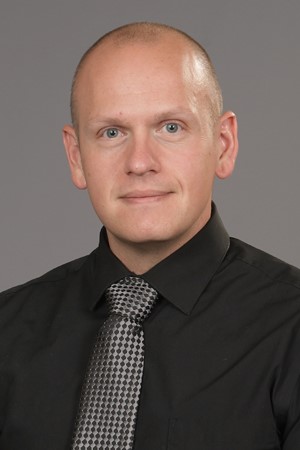 Eric is a 2007 Virginia Tech graduate and returned to Blacksburg in April of 2018. He worked as a graduate assistant for HokieVision from 2005-07. He worked at Illinois and Florida State and before moving on to Arkansas to help launch the SEC Network in the fall of 2014. Eric has returned to VT as Senior Director of ACC Network Operations, helping the athletics department prepare for the official network launch in 2019. He is a St. Louis native and resides in Christiansburg with his wife, Lisa, children Kelsey and Joshua, and dog Sammi. 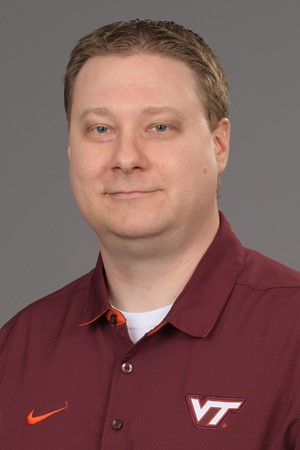 Tom came to the Athletic Video Office at Virginia Tech in Sept. 2000 as an editor for HokieVision from WSLS-TV in Roanoke, VA where he was a news and sports videographer/reporter/anchor. From 2005-2013, Tom directed the videoboard production on football gamedays. For the 2014-15 seasons he headed up the department's coaches video unit. Beginning in Feb. 2021 he is back in the same role. Tom makes sure the football coaches and players have all the video they need to get ready for their next game. With the assistance of eight undergrads, the crew films every practice from multiple angles and uses a 50 computer network to analyze and dissect every move made by the team on the field. He was named ACC Video Coordinator of the year by his peers for the 2015 season.

Tom grew up in a Hokie family in Erwin,TN and has been an avid fan of Tech athletics since he was a child, attending Tech football games since he was 6 years old. He is a 1996 graduate of the Department of Communication at Virginia Tech. Tom and his wife reside in Christiansburg. 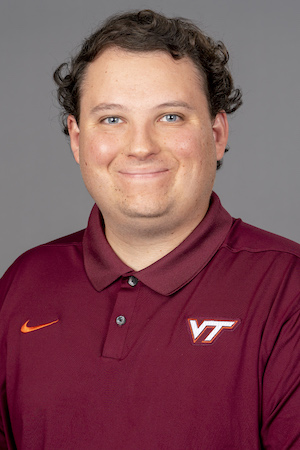 A native of Raleigh, North Carolina he comes to Virginia Tech after a brief stint at Eastern Kentucky University where he was the Football Video Coordinator. Adam attended Appalachian State University where he did football video for four seasons. While at App State he was a part of a program that went 43-10 over his time there that included Sun Belt championships and three bowl game victories. Adam served as the Student Director of Coaching Solutions for his final two years as a part of the Mountaineers program. 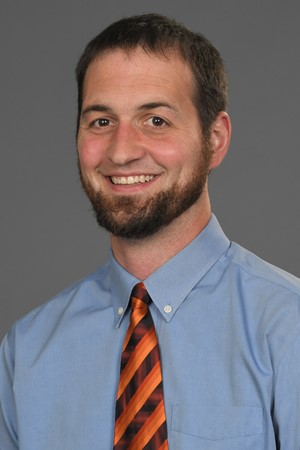 Matt is a Roanoke, VA, native who joined the HokieVision team in 2015. Matt has been involved with audio-visual technology in church settings for 8+ years, and has done freelance work for nonprofits, local businesses, and community development projects. As a Media Specialist, Matt contributes to graphics, camera work, editing, and other aspects of video streaming through HokiesXtra and ESPN3, and supports the day-to-day operations of HokieVision. In his spare time, he enjoys mountain biking and hanging out in the outdoors with his wife Jaime,daughter Sydney and their dog Izzy. 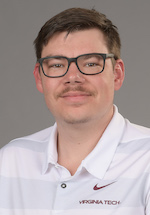 Daniel comes to HokieVision from Mercer University where he was a jack of all trades as Director of Video and Broadcasting. He was in charge of producing all the student run productions on ESPN3 for the entire athletic dept. He was also responsible for producing all of the social media content for football, MBB, lacrosse, soccer and baseball. He has three years experience working with the SEC Network while working as an Asst. Producer at the University of Kentucky.

Daniel will mainly be a Producer for all of HokieVision's broadcasts. He will be responsible for creating all the in-game features and the talent talking points for every home event. He is a proud 2014 graduate of Asbury University in Kentucky. 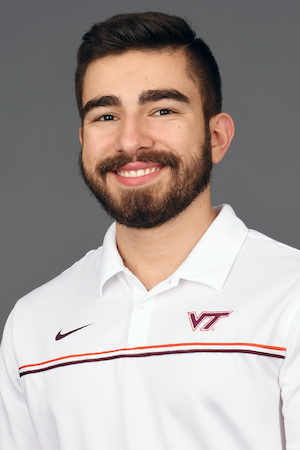 Alex joined HokieVision in June of 2020 after graduating from West Virginia University with a degree in Journalism and minors in Sports Communications and Strategic Social Media. While at WVU he assisted with the athletic broadcasts and videoboard shows as a replay operator, camera operator, director and technical director. The Cleveland, Ohio native will be assisting HokieVision with ACCN broadcasts primarily in the replay room. Outside of work, Alex can be found hiking, lifting or enjoying his vinyl record collection. 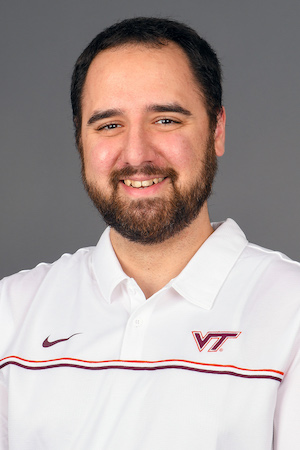 Trever joined HokieVision in November 2020 coming from Pittsburgh, PA where he did freelance work for PantherVision at the University of Pittsburgh and for AT&T Sportsnet Pittsburgh. Additionally Trever worked at WPXI-TV the NBC affiliate in Pittsburgh as a production assistant. He has 5 years of experience working at Pitt where he worked as part of the ACC Network team there working on the graphics bench as well as producing and audio mixing for broadcasts.

A native of Pittsburgh, Trever received a Bachelor's of Science from the University of Pittsburgh in 2010 in Chemical Engineering and another Bachelor's from Point Park University in 2016 in Communications with a focus on Broadcasting. In his free time Trever loves to watch movies, read books and go out to see a play or musical or go on a hike. 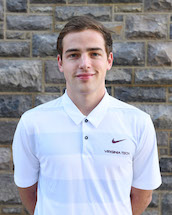 Jordan grew up in Harrisonburg, Virginia where he was surrounded by a Hokie family. Attending football games since he was four years old, it was always Jordan's dream to graduate from Virginia Tech and work in sports. Outside of HokieVision, Jordan enjoys playing sports, watching games, and spending time with friends and family. 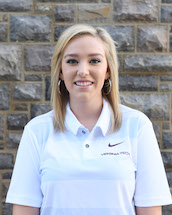 Maddy began working in HokieVision as a Production Assistant in 2015 and then as a Student Editor beginning in 2017. She is a 2018 graduate of Virginia Tech with a B.A. in Multimedia Journalism. During her time as a student, she was also involved with Virginia Tech Television as a sports reporter, editor and videographer, Chi Omega Fraternity as social media chair, and various other community service opportunities on campus. Maddy had the opportunity to join the HokieVision staff as a Content Editor shortly after graduation in 2018, where she edits content and assists with broadcasts.

A native of Richlands, Virginia, Maddy was born and raised a Virginia Tech fan, attending games since she was an infant. With Blacksburg being the place that sparked her love for sports, she's honored to be beginning her career with Virginia Tech Athletics. In her free time, Maddy loves traveling, experiencing new things, and making memories with her friends and family. 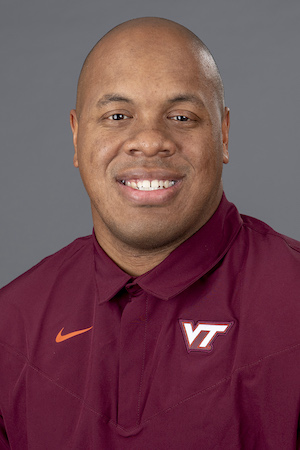 Jamaal joins the HokieVision team coming from Florida State University where he oversaw the creative video side for football and men's basketball. He earned his BA in Broadcast Journalism at the University of South Carolina with a minor in Sports Management, and an MFA in Film Production from Full Sail University.

Jamaal has had a passion for video production since his freshmen year at the University of South Carolina. He started his video production career as a Production Assistant for Gamecock Productions for 2 years, in which he helped stream/shoot varsity athletic events and produce game highlights and much more. Next, Jamaal accepted an internship with Monumental Network in the summer of 2014 in Washington, DC as a Video Production Intern. He helped edit and film segments for shows such as Monumental Today, Wizards Magazine, and Mystics Magazine documentary series. Also, he logged game footage to the network servers, filmed corporate sponsorship ad's and editing packages.

In addition, he has worked for the Lakeland Flying Tigers (Low-A affiliate of the Detroit Tigers) as a Video Operator. Lastly, Jamaal has worked with the Orlando Magic as a Videographer/Editor for the Broadcast Production Department where his next journey would lead him to Florida State University. When Jamaal is not working, he likes to go trail runs/walk, workout, play video games, read books and spending time with family. 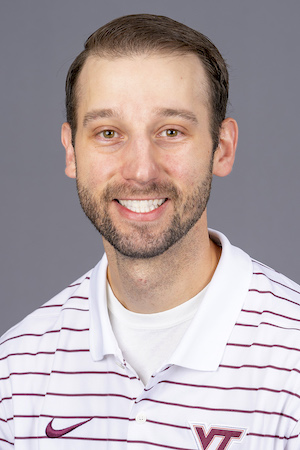 Tyler re-joined the HokieVision team as Chief Engineer after spending 5 years at the University of Arkansas working in their broadcast department. Before leaving for Arkansas, Tyler was a student production assistant for HokieVision.

Tyler grew up not far down the road in Lynchburg, VA. In his free time, Tyler enjoys playing sports and other recreational activities, as well as experiencing different restaurants around the area. 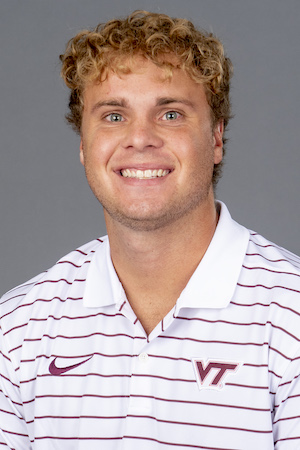 Brett grew up in Hockessin, Delaware and attended the University of Delaware,graduating with a BA in Mass Communications in 2020. He started his career by freelance editing for a few NBA players. After that he ventured into minor league baseball in Mississippi.

He joined Wake Forest Athletics in August 2021 as a creative content coordinator. Brett shot and edited videos for every single sports team at Wake, with a focus on Field Hockey, Volleyball, golf, and Mens and Womens tennis. That was followed by a brief stint at Louisville.

Outside of work, he loves playing and watching sports, which is where his passion for the job comes from. I love spending time outside, love to go skiing, or spend time at the beach.